When I tell you that I love King Richard’s Faire, that might not convey the full extent of my feelings toward New England’s oldest Renaissance festival. I’ve been going every year, basically since there was a faire, even flying home from college for the weekend to spend a day traveling back in time to the 15th… er, 17th… well, whatever century. The anachronism is part of the fun. (It’s also what allows me to walk in public unescorted by a man, because let’s not forget that the actual 15th century was a terrible time for women.)

King Richard’s Faire is equal parts awesome and awesomely silly: old timey but not historically accurate; theatrical but not theatre; risqué but not risky. But what’s so great about the Faire is that it’s in on the joke. The players are there to entertain the commoners, but they’re the ones having the most fun. Here are the things I love most about this season: 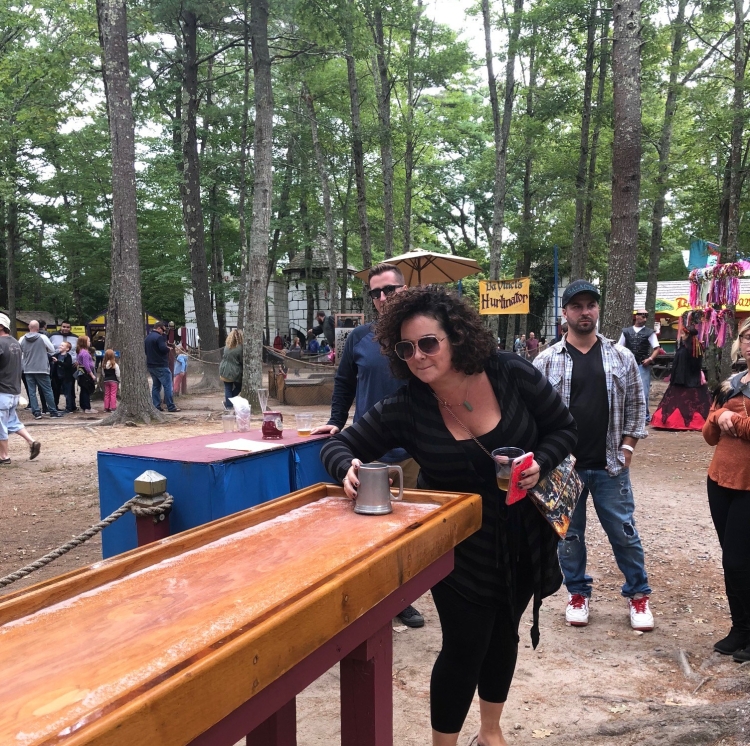 By which I mean, I actually got knighted this year. There are plenty of games of skill, but being that I am mostly unskilled, throwing an axe or a knife, or shooting an arrow and actually hitting a target, are not in my realm. I can, however, slide a mug down a very slippery 30-foot bar and land it in a tiny circle (pictured above). I feel equal parts pride and shame about this, but I have an official certificate of knighthood to soothe my pain.

A perennial favorite, Jacques is a “French” whip showman who makes bawdy jokes with an accent that falls in and out of use for comic effect. The fact that he regularly breaks Guinness World Records at the show – I watched him do it last year – is second only to the fact that he tangles himself up in an ignited whip on purpose three times a day.

There’s a Great Cats of the World Show, where you can see a giant white tiger and a black panther on stage. My preference, though, is the play area next to the Tiger Stage, which houses the most adorable baby predators you have ever seen, like this baby fishing cat, when they’re not on stage. You can get much closer than you usually get when they’re on stage, and you can see them interact with each other without their trainers. The baby cats paw around, play games with each other and totally make you forget that if you ran into one in the wild, you’d lose an arm.

In all my decades of attending King Richard’s Faire, I never actually watched The Mud Show. I always saw men romping around in a mud pit from a distance and assumed that I wanted to be nowhere near it. I had no idea what I was missing. The two men are the funniest comedy duo in all of Carvershire, and play peasants who dare each other to do increasingly disgusting things to “win” the day. It was hysterical – but I did close my eyes when one of them actually ate an entire grapefruit-sized mound of mud.

5. The Joust to the Death

There are three jousts a day, but if you don’t attend the final show where a knight actually “dies,” you’re not living right. They establish a storyline in the previous jousts of the day: someone is affronted, someone else must defend their honor, so on and so forth until all of the knights end up on the field, jousting each other off their horses and then finishing the job with swords and axes. This year, they really go for it with spurting fake blood and it. is. delightful.

This is the part of the day when all of the performers parade through the realm, enticing people to go see their shows. It’s also the only time of day you can get a guaranteed sighting of King Richard himself up close. What’s extra great is the interplay between parading players and cast members who they’re walking by. Everyone is having a very good time – laughing, joking and reminding the people watching why this is such a singularly special place.